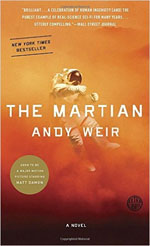 By Andy Weir
Six days ago, astronaut Mark Watney became one of the first people to walk on Mars. Now, he’s sure he’ll be the first person to die there. 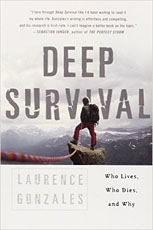 Deep Survival: Who Lives, Who Dies, and Why

By Laurence Gonzales
In Deep Survival, Laurence Gonzalez combines hard science and powerful storytelling to illustrate the mysteries of survival, whether in the wilderness or in meeting any of life’s great challenges. This gripping narrative, the first book to describe the art and science of survival, will change the way you see the world. Everyone has a mountain 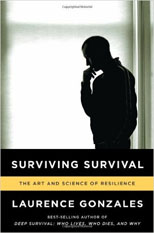 Surviving Survival: The Art and Science of Resilience

By Laurence Gonzales
The shark attacked while she was snorkeling, tearing through Micki Glenn’s breast and shredding her right arm. Her husband, a surgeon, saved her life on the spot, but when she was safely home she couldn’t just go on with her life. She had entered an even more profound survival journey: the aftermath. 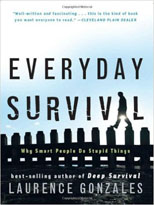 By Laurence Gonzales
“Curiosity, awareness, attention,” Laurence Gonzales writes. “Those are the tools of our everyday survival. We all must be scientists at heart or be victims of forces that we don’t understand.” 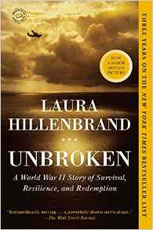 By Laurence Gonzales
In boyhood, Louis Zamperini was an incorrigible delinquent. As a teenager, he channeled his defiance into running, discovering a prodigious talent that had carried him to the Berlin Olympics. But when World War II began, the athlete became an airman, embarking on a journey that led to a doomed flight on a May afternoon in. 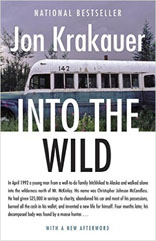 By Laurence Gonzales
In April 1992 a young man from a well-to-do family hitchhiked to Alaska and walked alone into the wilderness north of Mt. McKinley. His name was Christopher Johnson McCandless. 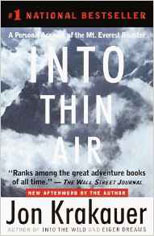 Into Thin Air: A Personal Account of the Mt. Everest Disaster

By Jon Krakauer
A bank of clouds was assembling on the not-so-distant horizon, but journalist-mountaineer Jon Krakauer, standing on the summit of Mt. Everest, saw nothing that “suggested that a murderous storm was bearing down.” He was wrong. The storm, which claimed five lives and left countless more – including Krakauer’s – in guilt-ridden disarray, would also provide the impetus for Into Thin Air. 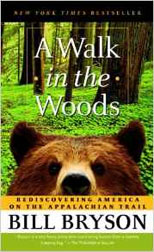 A Walk in the Woods: Rediscovering America on the Appalachian Trail

By Bill Bryson
The Appalachian Trail trail stretches from Georgia to Maine and covers some of the most breathtaking terrain in America–majestic mountains, silent forests, sparking lakes. If you’re going to take a hike, it’s probably the place to go. And Bill Bryson is surely the most entertaining guide you’ll find. 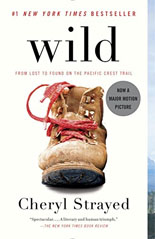 By Cheryl Strayed
In the wake of her mother’s death, with her family scattered, and in the ashes of a failed marriage, Cheryl Strayed made the impulsive decision to hike the Pacific Crest Trail. Wild powerfully tells the story of her adventure, capturing the terrors and pleasures of a young woman forging ahead against all odds. 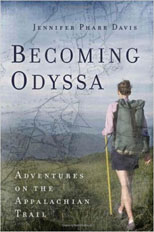 By Jennifer Pharr Davis
After graduating from college, Jennifer isn’t sure what she wants to do with her life. She is drawn to the Appalachian Trail, a 2175-mile footpath that stretches from Georgia to Maine. Though her friends and family think she’s crazy, she sets out alone to hike the trail, hoping it will give her time to think. 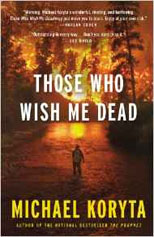 Those Who Wish Me Dead

By Michael Koryta
When fourteen-year-old Jace Wilson witnesses a brutal murder, he’s plunged into a new life, issued a false identity and hidden in a wilderness skills program for troubled teens. The plan is to get Jace off the grid while police find the two killers. The result is the start of a nightmare. 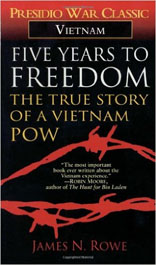 Five Years to Freedom: The True Story of a Vietnam POW

By James N. Rowe
When Green Beret Lieutenant James N. Rowe was captured in 1963 in Vietnam, his life became more than a matter of staying alive. In a Vietcong POW camp, Rowe endured beri-beri, dysentery, and tropical fungus diseases. He suffered grueling psychological and physical torment. He experienced the loneliness and frustration of watching his friends die. And 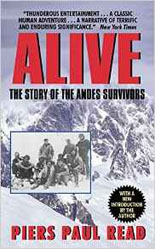 Alive: The Story of the Andes Survivors

By Piers Paul Read
On October 12, 1972, a plane carrying a team of young rugby players crashed into the remote, snow-peaked Andes. Out of the forty-five original passengers and crew, only sixteen made it off the mountain alive. For ten excruciating weeks they suffered deprivations beyond imagining, confronting nature head-on at its most furious and inhospitable. 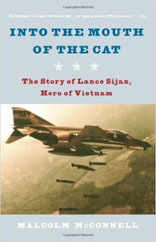 Into the Mouth of the Cat

By Malcom McConnell
On the night of November 9, 1967, Sijan was ejected from his crippled fighter-bomber over the steep mountains of Laos. Although critically injured and virtually without supplies, he evaded capture in savage terrain for six weeks. Finally caught and placed in a holding camp, he overpowered his guards and escaped, only to be captured again. 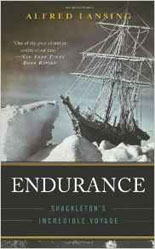 By Alfred Lansing
The astonishing saga of polar explorer Ernest Shackleton’s survival for over a year on the ice-bound Antarctic seas, as Time magazine put it, “defined heroism.” Alfred Lansing’s scrupulously researched and brilliantly narrated book – with over 200,000 copies sold – has long been acknowledged as the definitive account of the Endurance’s fateful trip. 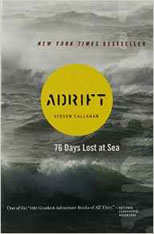 By Steven Callahan
Before The Perfect Storm, before In the Heart of the Sea, Steven Callahan’s dramatic tale of survival at sea was on the New York Times bestseller list for more than thirty-six weeks. In some ways the model for the new wave of adventure books. 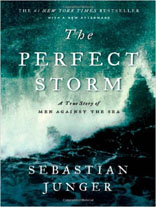 The Perfect Storm: A True Story of Men Against the Sea

By Sebastian Junger
Meteorologists called the storm that hit North America’s eastern seaboard in October 1991 a “perfect storm” because of the rare combination of factors that created it. For everyone else, it was perfect hell. In The Perfect Storm, author Sebastian Junger conjures for the reader the meteorological conditions that created the “storm of the century.” 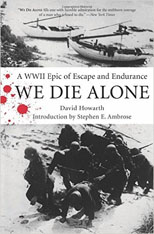 We Die Alone: A WWII Epic Of Escape And Endurance

By David Howarth
We Die Alone recounts one of the most exciting escape stories to emerge from the challenges and miseries of World War II. In March 1943, a team of expatriate Norwegian commandos sailed from northern England for Nazi-occupied arctic Norway to organize and supply the Norwegian resistance. But they were betrayed and the Nazis ambushed them. 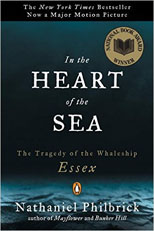 In the Heart of the Sea: The Tragedy of the Whaleship Essex

By Nathaniel Philbrick
Chris Hemsworth, Cillian Murphy, Ben Whishaw, and Brendan Gleeson will star in a new film based on this National Book Award–winning account of the true events behind Moby Dick. 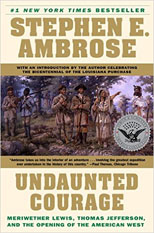 Undaunted Courage: Meriwether Lewis, Thomas Jefferson, and the Opening of the American West

By Stephen Ambrose
From the bestselling author of Band of Brothers and D-Day, the definitive book on Lewis and Clark’s exploration of the Louisiana Purchase, the most momentous expedition in American history and one of the great adventure stories of all time.