Time in the Wild

GEMS camp explores the connections between learning survival skills and learning to lead.

If Allie Mitchem ever finds herself among the cast of TV’s Survivor, she’s certain to be in high demand as an alliance partner—even at the tender age of 13.

After attending a five-day, overnight camp for middle-school-aged girls called Girls Empowered at Mountain Shepherd (GEMS) each of the last two summers, Mitchem is now skilled at making fires, building shelters out of a rope and a tarp, and finding food when stranded in the wilderness with no supplies. 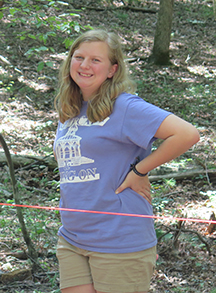 Until she attended GEMS camp, held on a secluded 100 acres in Catawba, Virginia, at the Mountain Shepherd Survival School, the most exotic thing Mitchem had ever eaten was calamari. As a camper, she gobbled down black ants, which she didn’t squish dead before ingesting. “You just have to grab it and eat it really fast,” she says.

While admitting insects are high on the “eww” factor, Mitchem didn’t hesitate to complete this optional camp activity because GEMS founder Dina Bennett ate ants right by her side. “After I ate the first one, it was really cool,” Mitchem recalls, “and I kept trying some.”

The partnership between Hollins and Mountain Shepherd Survival School, which is located about 40 minutes from campus, began in August 2012 when Bennett called Abrina Schnurman-Crook, executive director of the Batten Leadership Institute, to tell her about Mountain Shepherd Survival School. Schnurman-Crook connected Bennett with Jon Guy Owens, director of the Hollins Outdoor Program. The two clicked right away.

“She’s one of my best friends now,” Owens says of Bennett, who trained sales staffs before becoming vice president of Mountain Shepherd Survival School, which was founded by her husband, Reggie. 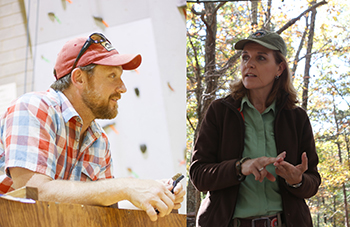 In 2015, Owens and Bennett joined forces to lead a Short Term course called “Survival for the Modern World,” in which they taught the seven priorities for survival—positive mental attitude, first aid, shelter, fire, signaling, water, and food—and, according to the course description, how to “identify parallels existing between wilderness survival techniques, university life, personal life and growth, and ultimately the business world.”

The course, which they repeated in 2016 and 2017, counts toward requirements for the Hollins Outdoor Leadership Certificate, but it isn’t only for students preparing for careers in outdoor recreation. It teaches students skills they can use in their day-to-day lives, says Owens. “It helps them break down situations so they realize what resources they have around them and how to maintain a positive mental attitude so they can persevere through a situation.”

Kayla Deur ’16 took the course her junior year at Hollins, right before leaving to study abroad in Cambodia and Vietnam. Already active in HOP, Deur planned on a career in the outdoor industry after graduation.

Early on, Deur admitted to her classmates she had never before traveled outside the United States, and she had big-time nerves about the upcoming semester. “Dina really supported that, and she took the time to help me find connections in the course that would help me prepare to study abroad,” Deur says.

Deur and Bennett kept in touch during Deur’s time abroad and afterward. “When I got the idea to do the GEMS camp [for middle-school-aged girls], she was the first person I called,” Bennett says.

No matter a student’s cultural background or grade point average, most will be brand new to the outdoors, Bennett points out. “It’s an amazing equalizer,” she says. “It brings people into a common area, enjoying the same things and learning new skills.”

Deur enthusiastically signed up to help organize the first GEMS camp in the summer of 2016. She spent much of her free time her senior year helping Bennett create marketing materials and design the camp curriculum. Deur was the one who came up with the GEMS name. “I was trying to think of a name that would give us a good acronym,” says Deur, who majored in environmental studies and sociology. “I knew I had gained so much confidence from the similar experience I had with Dina in my J-Term class. Empowerment felt like the right word to try to fit in.” 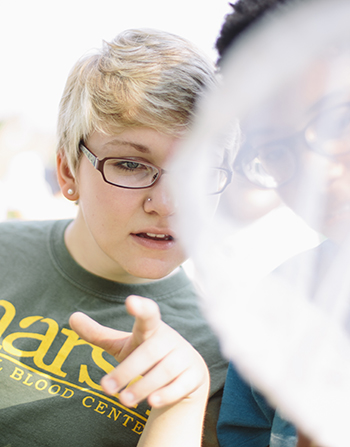 A couple of weeks after Deur graduated from Hollins, Mountain Shepherd offered four five-day overnight sessions of GEMS camp, with four campers attending each session. Along with Bennett and Deur, Dani Derringer Zhang M.A.T ’13 (daughter of Professor of Chemistry Daniel Derringer), who had been active in HOP while at Hollins, served as a counselor. “We did it all,” Deur says. “We did the cooking. We did the bedtime. We did the wake-up.”

By being on hand 24 hours a day, the three women got to know the campers very well. “We were all able to build really strong relationships with the girls,” Deur says.

In addition to the three counselors, GEMS campers often receive visits from guest instructors such as Schnurman-Crook, Owens, and his wife, Anna Copplestone ’06 (psychology), ’15 (environmental studies), who works on campus as the coordinator of the IT help desk.

At the end of that first session of GEMS camp, Bennett felt confident she’d found her dream career. “It’s the most fulfilling thing I have done,” Bennett says. “Just to be able to make a difference, to engage in their lives and help them stay courageous and be confident in their choices.”

The experience also affirmed Deur’s belief that girls in this age group need time in the wild. “I really like to see them learn how to stay true to themselves and not feel the pressure to change and adapt and fit in so much,” she says.

Thirteen-year-old Mitchem observed a difference in herself after spending a week at GEMS camp, too. “When I first arrived, I was not very good at talking and meeting people and stuff,” she says. “After going to that camp, I felt a lot more comfortable talking.”

Campers like Mitchem told camp organizers they wanted to come back the following year. The girls, Deur says, “really challenged us to build more and give them more.”

After that first summer of camp, Deur signed on as assistant manager of education programs at the Chesapeake Bay Foundation’s Brock Environmental Center, so she wasn’t able to attend GEMS camps in summer 2017. But she has already coordinated her schedule for the coming summer to be able to attend some of the GEMS offerings. “In typical Hollins fashion, I just want to do everything,” Deur says. 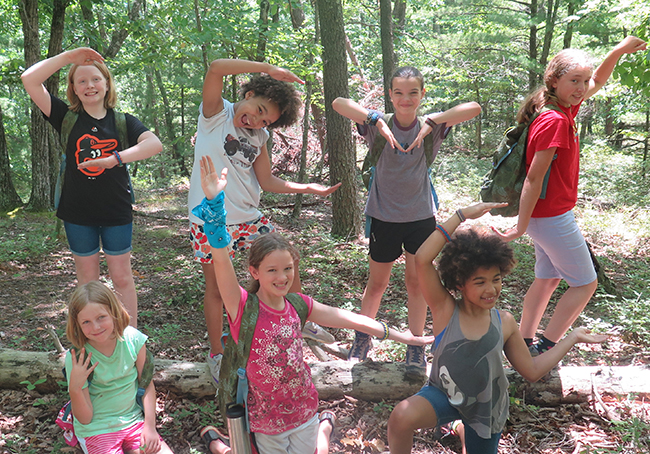 The summer 2018 sessions will include a GEMS camp 3, which will emphasize canoeing and rock climbing for GEMS veterans, as well as a session for high-school girls. “I want to be able to still bring them in and catch them up,” Bennett says of the older students.

About 35 percent of the campers from the last two years hailed from the Roanoke Valley, according to Bennett. She would like to attract more local students and is working with Owens on a plan to pair local GEMS campers with Hollins students once a month for activities. “We want to go a little more year-round,” Owens says. Campers would be able to continue polishing their outdoors skills by doing things like visiting the Hollins climbing wall and then eating with their mentors in Moody. The goal, says Bennett, is for the GEMS campers to be able to picture themselves in a college environment. “Ideally, as we build on this, and they’re doing more outside, they’re becoming leaders, and then they want to become Hollins students,” she says. “That’s the grand master plan, right? We want them at Hollins.”

Beth JoJack is a Roanoke writer and frequent contributor to Hollins magazine.